This region encompasses the big cities from Teheran to the ancient capital of the Persian empire – Shiraz. Here such historical cities as Isfahan and Yazd – a city which is still considered to be the center of Zoroastrian culture, are based. Kashan, Isfahan and Fars are the cities best known for the carpet-weaving and tying methods.

Tehran is city which based at the foot of the Alborz mountain range and became the capital of Persia in 1789s. Currently it is a large modern metropolis with population close o 14 million. Interestingly, it does not have long-standing carpet-weaving traditions, although old Tehran carpets are found every once in a while. Their ornamental motifs are dominated by subtle ringleted floral paterns, and weave is mostly dense. 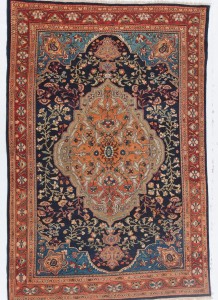