This city has been known from the times of the Median empire, when it was called Ysatis. During Sassanid times, it was a Zoroastrian center which attracted many devotees after the start of the Islamic conquest of Persia.

This city is between Isfahan and Kerman, and it used to be the main outpost on trading route to India. Yazd is rich in its architecture. There still remain yakhchals – ancient dome-shaped coolers where the ice brought from the mountains was kept. Yazd is the center of Iran’s Zoroastrianism, and it has fire sanctuary where the eternal fire has been burning since 470s.

Carpet-weaving, along famous Yazd brocade cloth making, developed quite reluctantly, probably due to hot and dry climate which was unfit for sheep breeding. The wool coming from the sheep kept in this region is very fragile, thus not long-lasting. Carpets woven in Yazd are very thin, however their rich colors and abundance of hidden ornamental symbolism is enchanting. The Zoroastrian cross symbolizes air, earth, water and fire. This symbol is very similar to the pagan symbol representing Žemyna the goddess of earth. 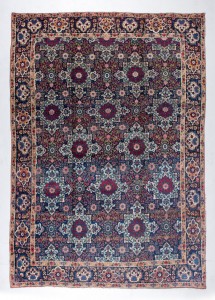